(Involvement and reflection on the choice of fabric as the main medium in my artistic practice.) 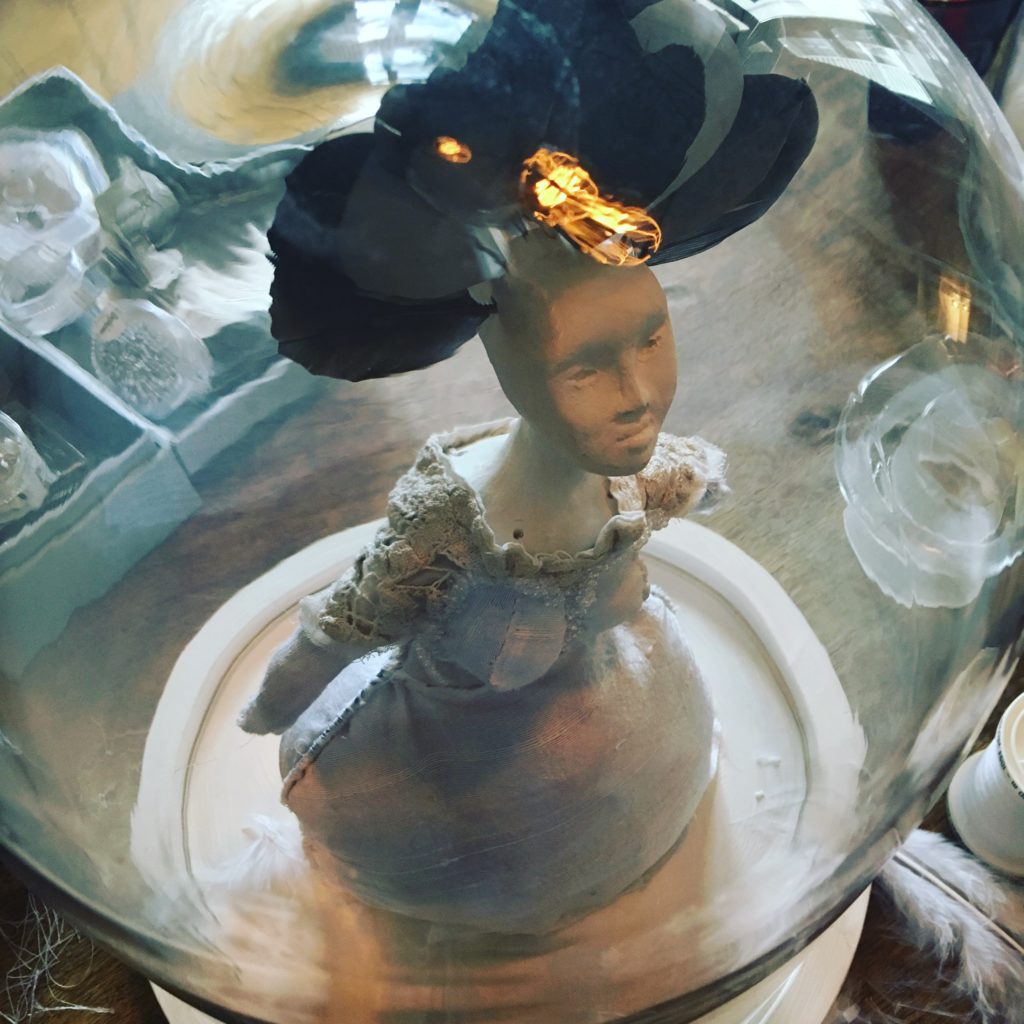 It was a bit by chance that I started cutting shapes in the fabric. I have always been attracted to anatomical or botanical plates, certainly by the fact that there is a link of shapes between the plant and organic sphere. Very quickly the fabric dish began to fill with acrylic wadding or vegetable fibers to take place in space, piece by piece, interlocking or clinging to each other to give these invasive shapes. (Extension of myself?)

From one thing to another, like the sometimes archaic path of thought, the fabric calls for gesture, form and intention. There is a strong entanglement between the feeling and the imprint of these “emotions” in my use of textiles. In relation to the primary function that we have of textiles through clothing, housing, and all its derivatives, the notion of protection or identity is always very present. Through fashions, the fabrics, whether worn or used for decoration, reflect both the technologies and the thought systems of the time to which they belong: appearances, social status, geography….

On my scale, I work with fabric as a European woman who has as an example other artists who have already destructured textile work to get it out of its original function. (Louise Bourgeois, Annette Messager, Marie Ange Guilleminot …………..)

Five years ago, I was working on the fabric in a way that was detached from my own body. The notion of object, of sculpture as a word placed on a base. A scenography of a state of being, a staging of thought. A curiosity cabinet using figurative anatomical shapes that compose a “herbarium” or a puzzle to be arranged according to the positioning.

And this is precisely what happens… Just as the clothing positions you. So I cut into several of my clothes, starting with the falls from my wedding dress, my favorite skirt worn down to the weft… Then other clothes that did not belong to me but that retraced for a moment the life of one or another or I saw a resonance to serve my purpose. Emma Bovary’s corset, the nightgown giving life to a black and phantasmagorical psyche, or the silk tee shirt of a ready-to-wear brand in a flea market that reveals brains of many shapes…

The sculpture object thus obtained takes place both in the support and in the space. The place of creation is as much about the gesture it implies as it is about its origin. A kind of nomadic and experimental freak show. To draw the veil to give meaning and poetry, even if it starts from a very personal idea of reality, taking its bases in the spoken word and the foundations of my imagination.

Despite the still current caricature of the genre suggested under the name of “needlework”, there is an action, an ancestral idea in the gesture of sewing.  Whatever the creation or the artist, the act of passing thread through a needle and sewing fabric pieces together implies positioning. It is not so surprising that we are so much French expression on the yarn, the fabric: Fabric of lie, from one yarn to the next, a needle in a haystack, sewn with white yarn, conductive yarn, the red yarn, the twisting yarn, the razor yarn, Ariadne’s yarn, hold only one thread, the weft of time. (Double direction Embroidery: exaggerate, embellish, invent…)

Just as mythology has used these same symbols to represent time, the positive and negative link, the outcome….

The Fates and their thread that they can decide to cut. Penelope who every night undoes his work to keep the suitors away. Ariadne and her thread, which allowed Theseus to get out of the Labyrinth and escape the Minotaur.

Yarn and all textile materials are linked to the existence of man, both literally and figuratively, for his protection, his survival, and then appearances, filiation, the social bond whether it is real or invented from scratch.